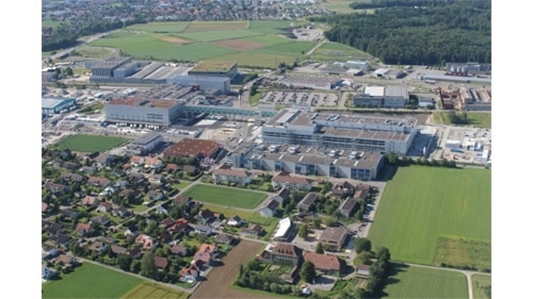 Designed and implemented by TGW, the first phase of a complex, four-area distribution center expansion project—the General Goods section—has received final acceptance by Swiss food retailer Coop. The project seeks to consolidate three regional distribution centers into a single site, calling for the expansion of an existing facility in Schafisheim for service to 350 supermarkets in the Zurich area, as well as those located in Northwest and Central Switzerland.
As one of the largest construction sites in central Switzerland, the new large-scale facility covers an area of 110,000 square metres. With an order value of about $105.9 million (U.S) (100 million Euros), the project was the biggest order in the history of TGW when it was contracted June in 2013. Critically, the construction, installation and commissioning of the new building and its inter-dependent automation sub-systems had to be conducted while the existing Schafisheim operation continued to run—shipping flowers and plants, fruits and vegetables, dairy products and general goods, as well as products from the bakery and confectionery departments.

The distribution center operates around the clock, 24 hours a day, seven days a week.  When fully operational in Spring 2017, the TGW material handling system will send 13,000 roller containers and 2,000 Euro pallets to the shipping areas every day.

Harald Stallinger, Managing Director at TGW Systems Integration is excited about the completion of the General Products phase of the installation. "An important milestone has been reached,” he says. “The acceptance of the other phases of the project, including the Empty Packs Center, Bakery Center, and Refrigerated/Freezer Center, will follow shortly. We are pleased with the outcome—a result of good teamwork between our employees, the planners, suppliers and the entire Coop team.”