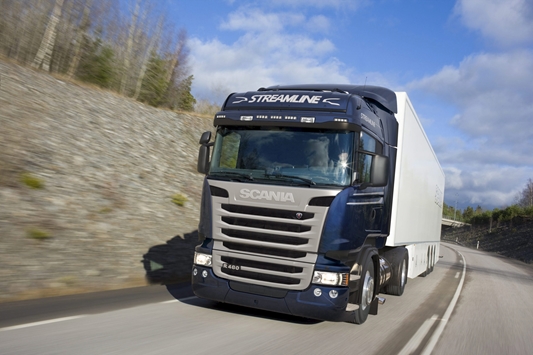 Scania, the well-known Swedish truck manufacturer operates a Global Parts Distribution Center in Opglabbeek in Belgium. Measuring over 120.000 m2, the Global Parts Center stores more than 100.000 different parts, and the 600 co-workers process on average about 26.500 orderlines per day, which are shipped to regional parts centers and distributors around the world, as well as to European distributors and dealers of the brand. The Parts Center relies on its flexible and reliable staff, robust processes and innovative technology to maximize productivity, whilst at the same time maintaining process quality.

The case for RFID

For the outbound logistics department, shipments to overseas destinations (“export shipments”) have always commanded a high degree of attention. In many cases, custo- mers order spare parts for defective trucks that must be repaired and brought back into service asap. Any delays because of in-complete parts shipments, or delays caused by paperwork not matching the physical shipment are catastrophic for the business. And thus delivery and more specifically loa- ding accuracy is of the highest importance. This is the primary driver for the company to investigate and ultimately to invest in RFID technology. The second reason is that with RFID technology the process becomes far more efficient, as the second operator, who did a full double check, is not needed anymore.

Next to the need to improve the loading accuracy, Scania was also looking at two other areas of improvements. First, the RFID system should support operators by telling them the target location of the colli when they enter the expedition area. This ensures that all items of a shipment are put as close to the loading dock as possible. But, as packages for export shipments can be any size and measure because they contain all kind of different parts of a truck, it is not al- ways possible to store all colli in front of the loading dock. So a real time locating system, that tells operators during loading where side-tracked colli can be found, is a benefit to speed up the loading process.

After an extensive selection and evalua- tion process that included an operational pilot lasting several months in 2012, Mojix UHF passive RFID reader technology was selected. The phased array  STAR antenna covers the complete export shipping area, and is able to locate passive UHF tags over a distance of 200 meters, as long as the tags are excited by “excitation antennas”. These “exciters” are installed at the 3 entrance doors to the export shipping area, tracking colli moving in or out of this area. And a grid of in total 128 of these antennas (4 by 4 me- ters, at a 5 meters high) is installed covering the export shipping area to locate staged colli. Excitation antennas are also installed at the 6 loading docks to capture all loading movements.

Colli are picked and packed as before, but ToshibaTec RFID/barcode printers now print the barcode label, and encode a Smartrac Frog 3D RFID tag embedded in the barcode labels. Packed and labeled colli are then picked up by forklifts and moved to the export shipping area. The Mojix antennas at the entrance doors excite all tags on the fork, as well as an RFID tag that identifies the forklift. The STAR antenna locates the tags and determines that colli “transition” from the picking area to the export shipping area, and the RFID application on the forklift shows the operator on a terminal for which destination the colli are, and where to put them. Subsequently the RTLS antenna grid locates each individual collo. When colli for a shipment are not grouped properly on the designated staging lane (because for example there was no space during putaway) the foreman uses the  "replacement application” to instruct the forklift operators which pallets to regroup, to optimize the loading process. When all colli for a shipment are collected on the staging lanes – as shown by the RTLS, the loading process starts. The loading operators use the RFID application on the forklift terminal to select the routes that need to be loaded. If colli are loaded for a wrong route, an error is shown, and also when colli are not released yet by the customer  service department or if they have an ADR (dangerous goods) code requiring special handling, error warnings are shown. If despite the efforts to put all colli together at the same dock, items cannot be located, the operator uses a colli lookup function to search for the missing items. The registration performance of the RFID systems at the docks is 99.8%! This includes about 15% of the items that are carried manually into the truck, because they can’t be handled by a forklift.

Mieloo & Alexander supports Scania with its RFID strategy and technical tests and pilots since 2008, and was responsible for design, build and implementation of this project.
Mieloo & Alexander developed the RFID applications, rolled out the Mojix hardware and software, and project managed the project from beginning to end, in close collaboration with Scania, and with Mojix Inc. Mieloo & Alexander’s support team takes care of the system now that it’s fully operational.
Onderwerp: Warehouse Management Automatische identificatie - RFID   Bedrijven: Mieloo & Alexander