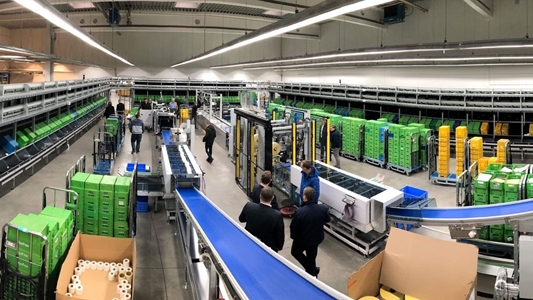 When PIN AG of Berlin went in search of the “sorting concept of the future”, it found the right partner in BÖWE SYSTEC and an innovative technology in the form of its Hybrid Sorter. The result has been a currently unique sorting line that simplifies and speeds up the sorting process at one of Europe’s largest private postal service providers. It consists of a two-level push-tray sorter running for almost 100 meters, with two highly flexible feeding lines.

PIN AG employs over 1,300 people and at its Berlin-Mahlsdorf sorting center, which operates six days a week and part of the time round the clock, up to 750,000 items can be processed every day, rising to over a million when demand surges. When asked about the recipe for success, Bernd Fricke, PIN’s Chief Operating Officer, responds that, “Our colleagues have a detailed understanding of our business, which enables us to be very flexible and to adapt quickly to changing requirements.” There’s no doubt such flexibility is a must because mailing volumes can fluctuate from one day to the next by up to 30 percent and usually it’s difficult to predict these ups and downs. But the professionals at PIN, whether in the sorting center or delivery, take these in their stride. Some 180 of PIN’s 1,300 employees work in sorting.

HYBRID SORTER: TECHNOLOGY OF THE FUTURE

BÖWE SYSTEC’s Simex Letter, Criterion and IntelliStar systems for mixed mail sorting have been a feature of the halls for many years. But the time had come to replace the latter and back at the end of 2016, PIN AG began to think about what a new generation of machine might look like. Taking a complex market analysis of what PIN AG’s customers were looking for both now and in the future into account, BÖWE SYSTEC came up with a winning concept for a so far unique system based on its OptiSorter that boosted the overall efficiency of the sorting process and reduced manual pre-sorting to a minimum. Since the system is based on the Horizontal OptiSorter, which was originally developed for packet and parcel sorting, but which in the Berlin configuration takes a broad spectrum of letter post, too, it is referred to as a Hybrid Sorter.

The Hybrid Sorter, which is designed to handle 14,000 items per hour, went into operation at PIN AG at the end of October 2019. The sorting solution is based on the OptiSorter’s proven Push-Tray technology and features two lines feeding items to two sorting tracks that are stacked one above the other. One of these infeed channels is equipped with an automatic feeder for letters up to 3.2 mm thick, whilst the other, which has manual infeed, can be simultaneously fed from up to five workplaces. This line is used for larger items that are up to 150 mm high and weigh up to 2 kg, such as mailed goods or books. As a result, mailing volumes from up to six customers can be sorted at the same time, which saves on customer changeover times. Both feeding lines are fitted with the best OCR technology on the market so that there are virtually no addresses – even illegible handwritten ones – that cannot be read. Downstream, there is a weighing and format measurement station that calculates the postage and determines the sorting destination. Bernd Fricke: “The productivity of the machine is outstanding. We measure, weigh and count every item in accordance with our customers’ wishes. Our customers trust that our technology is able to determine the precise weight of every item even at full speed.” Finally, the label printer applies the date, customer logo, sorting info, barcode and the PIN AG logo before the items are sorted and routed to different delivery partners, depots or delivery areas by twin circulating push trays running one above the other that are each nearly 100 meters long.

However, what is really special about the whole sorting solution is a diverter integrated into the feeding lines that routes standard and compact letters out of the stream on to stacking belts, if these items would be better processed by BÖWE SYSTEC’s high-speed Simex Letter sorting systems. This means that in future much of the manual pre-sorting for these systems can be dispensed with. What was once a multi-step pre-sorting process has now been substantially simplified. Sascha Breddin, Member of the Management and Operations Director: “Of course we still need to separate out incoming items – what goes to the high-speed machines, what is sent for manual sorting and what to the Hybrid Sorter’s autofeeder. But it’s now much simpler and faster.“ The new sorting technology has been readily accepted by the staff. Crucially, they were involved in the development process right from the start. “Everything has been determined in close cooperation between BÖWE SYSTEC and our staff”, explains Sascha Breddin. Questions of workplace safety and ergonomics were also taken on board.

THE IMPORTANT ROLE OF THE SOFTWARE

The hardware alone is not responsible for the success of BÖWE SYSTEC sorting solutions. Software, too, is an important part of the overall package. For example, calculating the postage costs means that the software has to interface to the ERP system of PIN AG’s customer. The software package also determines the complete processing and sorting logic of the system. If desired, delivery-based sorting can be switched to product or size-based sorting. Since all BÖWE SYSTEC machines are networked, data that has already been captured for the sorted items can be exploited. Bernd Fricke: “It’s a plus during sorting that all the machines can communicate with each other – it’s a real example of BÖWE SYSTEC expertise.”

Five mixed mail processing lines have now been replaced by just one machine– a risk? Sascha Breddin is positive that it isn’t: “The new Hybrid Sorter can indeed cover what the previous machines could – but it can also do so much more! This opens up new possibilities for us. We have, for example, adjusted to mailing structures that back in 2016 we were just getting to grips with but that have now become routine.”